A FRIGHT AT THE MUSEUM!

The above title was my jokingly suggested title for the latest After Midnight Productions film project, summarily (and rightly so )dismissed by director Andrew Loverage in favour of the actual title of ‘Closed Circuit’.

‘A Fright at the Museum’ was of course said with tongue planted firmly in cheek, but if nothing else it did truly reflect the overall vibe of AMP’s latest offering which possibly has as many frights as it does minutes!

By their very nature museum’s have an air of creepiness about them given the devotion to all things past, but once devoid of the public, doors locked and lights turned to minimum ‘The Wellingborough Museum’ the film’s locational setting certainly had the senses on edge.

‘Closed Circuit’ is the next ghost based story from the team behind last year’s ‘Nyctophobia’, and in many ways takes that same recipe and condenses it into a bite sized festival friendly version.

I can’t give away too much at this point, but suffice to say the mood and atmosphere, jumps and scares are all there, accompanied by another Stirling performance by Michael J Richards the caretaker from ‘Nyctophobia’ now cast as an equally creepy and lurking museum curator!

Benjamin Lewis plays the guard with a somewhat casual approach to security. Whilst Zoe Taylor takes the spooks role and capably delivers the chills on demand and usually when least expected.

‘Closed Circuit’ is now nearing completion in post-production and looks set to be a great little fright flick on this years festival circuit.

It has been fantastic to work on, and the good news is that it’s unlikely to be the only film from After Midnight Productions this year – so watch this dark space!!

(se my separate blog about the audio production for the film) ! 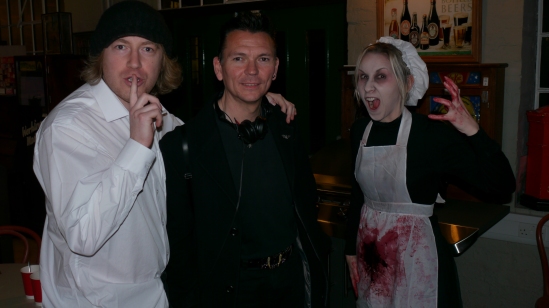